Novel, an art of language/literature, is a genre that is based on narrative principle, which stands out with its aesthetic aspect. It is accepted that aesthetics and beauty are dominant elements in the writing of this genre. Serguzest, written by Samipaşazâde Sezai within the scope of a distinct artistic delicacy, is a work of art that stands out with its handling of captivity narrative’s realistic aspects of Tanzimat reform era literature and its arty narration. In this sense, aesthetic elements attract the attention in this novel which many critics describes as the transitional work from Romanticism to Realism of its era. The novel attracts notice with its aesthetic aspect especially in terms of handling the plot, characters, location, language, style, narrative forms and techniques. The author prioritized the aesthetic elements by including art forms like poetry, music and mainly painting within the frame of the touching and emotional romance that he added into the captivity narrative. At the same time, he portrayed nature, setting, things and objects by taking aesthetic criteria into consideration. In this study, the novel Serguzest is analyzed in the concept of its aesthetic elements. In the introduction part of the article, the concept of aesthetics is explained and the relation between the novel genre and aesthetics are mentioned. Afterwards, the aesthetic style in Tanzimat era novel, point of view are discussed and Samipaşazâde Sezai’s aesthetic delicacy and his approach to the beauty element are laid emphasis on. Later on, the novel is studied in the concept. Although the novel Serguzest is distinguished with its realistic side, It the author’s handling of the characters more with their sensuality; it is valuable in terms of his approach to location, nature, things his approach within an aesthetic integrity. Besides, the fact that the protagonist is a painter and the adoption of poetry and music in the narrative/transmission show that aesthetics and beauty are prioritized in this piece of work. 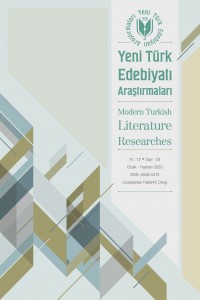