Red blood cell(RBC) transfusions(TF), are frequently administered in preterms during their stay in neonatal intensive care unit(NICU).Up to 90% of very low birth weight preterms receive one or more transfusions in first weeks of life.In our study,we aimed to evaluate the risks associated with ES transfusion in preterms born <34GW. Materials and Methods: 68 infants born under 34 GW were included.The medical records of infants were retrospectively reviewed.Demographic information and clinical findings of the babies were evaluated in the first week,7-14. days and 14-21. days.The number of blood samples were recorded.The infants were divided into two groups as transfused and non-transfused.Clinical outcomes were compared. Results: Of the 68 cases included, 35(51.4%) were female and 33(48.5%)were male.Mean birth weight of TF and non-TF group were 1301±402.8 g and 1425±462.3 (p>0.05) and mean gestational age was 30.0±2.64 and 30.8±2.04 weeks (p>0.05) respectively.Twenty-five (36.7%) patients had multiple TF.The mean weight and gestational week of the group with multiple TF was 1041±205 g and 28.7±1.2 weeks, respectively.In the TF group, the first, second and third TF days were postnatal 21.4±10.9, 29.6±11.6 and 32.83±8.9 days, respectively.There was a significant difference in terms of duration of ventilator stay, hospitalization time, sepsis and inotropic requirement(p <0.05). Cumulative blood loss between 7-14 days were significantly higher in TF group(p <0.05).There was no difference regarding cumulative blood loss between 14th and 28th days(p=0.009).The duration of ventilator stay of the babies in the multiple TF group was also statistically higher (p <0.05). At postnatal 7 th,14 th,28th day, it was seen that the transfused group gained less weight.Bronchopulmonary dysplasia was found to be increased in TF group than non-TF group.When the groups were compared in terms of ROP, the rate was found similar in both groups (p>0.05). Conclusion: In our study, we found that babies receiving TF had longer duration of ventilator stay,hospitalization,sepsis and inotropic requirement.The number of blood samples taken in first two weeks increased the need for TF.In order to reduce the need for TF in preterms, it is necessary to reduce the number of blood samples taken by using micro methods and non-invasive monitoring. 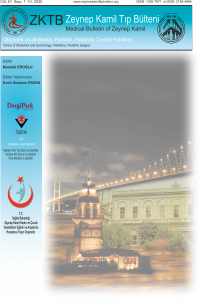