Ambiguity on Definitions of Memorate Concept and an Attempt to Definition

Myth, fairy tales, legends, folk stories, anecdotes, which have been accepted for a long time in prose narrative tradition, have been studied with various methods of investigation and they have continued to be expanded. There is no doubt that a new species called "memorate" has been added to these species, which have been frequently discussed, in a short time has been instrumental in the emergence of great differences of opinion. The so-called "memorate", which is the center of our production, caused problems in Europe with the inclusion of terminology in 1934 and in American folklore studies since the 1970s. The concept of "memorate" and "fabulate", which was invented by Von Sydow and has basic definitions together, is related to not only what is happening but also what is not and therefore these concepts have been tried to be defined in various ways for a long time. It is worth noting that the attempts to draw the boundaries of this definition and conception partly helped to put the concept on the ground, but a comprehensive consensus never emerged. The reason is that these two concepts are perceived in different forms. We think it would be more appropriate to complete this work in three stages. In this respect, we will examine the emergence of the concept in the first part and the definitions on this concept, the second part on the problems of definitions of "memorate" and "fabulate", and the third part on the basis of all the obtained data and studies. 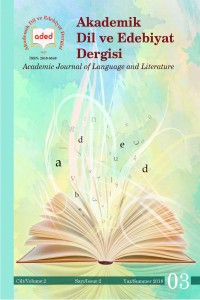