The Number of Response Categories and the Reverse Directional Item Problem in Likert-Type Scales: A Study with the Rasch Model

This study addressed reverse directional item and the number of response categories problems in Likert-type scales. The Fear of Negative Evaluation Scale (FNES) and the Oxford Happiness Questionnaire (OHQ) were used as data collection tools. The data of the study were analyzed according to the Rasch model. The analysis found that the observed and expected test characteristic curves were largely overlapped, each of the three rating scales worked effectively, and the differences between response categories could be distinguished successfully by the participants in straightforward directional items. On the other hand, it was determined that there were significant differences between the observed and expected test characteristic curves in reverse directional items. It was also found that no matter which one of these three, five and seven-point rating scales was used, the participants could not distinguish the response categories of the reverse directional items on the FNES and the OHQ. Afterwards, the reverse directional items were removed from the data file, and the analysis was repeated. The analysis results revealed that item discrimination, reliability coefficients for person facet, separation ratios and Chi square values calculated for the facets of person and items were higher in five-pointed rating compared to three and seven pointed rating. 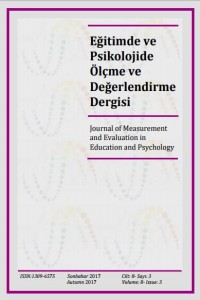