Halāl and harām are the most two important concepts in the life of a Muslim as they draw the boundaries relating to life and nature. The sensitivity or insensitivity, in other words, care or carelessness of the person about the halal and haram is determined by the quality of his religiousness. When halāl food is mentioned, it is necessary to think not only of the food items that are consumed but also the ways of earning money. Being halāl or haram of the food, not only affecting the physical and spiritual health of the people but also the quality of the ways of making money, greatly affects the acceptance of worship, happiness, family life and relationships with other people. For this reason, Allah and His Messenger have expressed the sensitivity to the fact that not only the food itself but also the ways of making money should be halāl. The highest principle set in this regard is the honesty. The test for the honesty of the parties is the fact that the consent of the parties is ensured, and no easiness remains among them. The Qur'ān and the Sunnah of the Prophet clearly identified halāl-harām, and sometimes drew its boundaries too. It is a religious duty to follow exactly what is clearly determined. In cases of frame drawn, the ijtihad steps in and whether a material is halāl or not is determined by the efforts of the scholars. It is natural that some differing opinions arise in this matter. In particular, the approaches to marine products and land animals constitute the examples in this respect. In this paper, it is tried to point out halal-haram deter-mined explicitly, and the halal haram identified by the jurisprudence of the Islamic scholars and some principles that concern the philosophy in this regard. 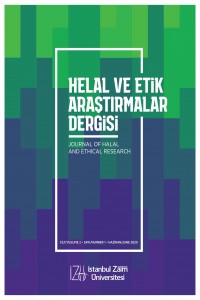