In this study, the effect of Euproctis chrysorrhoea (Linnaeus, 1758) species, known as the Brown-tail moth in the determined locality, on many plant species was investigated and it was determined that caused significant damage to the related plant species. The brown-tailed moth gives offspring once a year. There are four biological life stages. These are eggs, larvae, pupae, and adults. Eggs are laid in July. The egg stage lasts for one month, the larval stage for nine months, the pupa for one month, and the next stage for one month as an adult. It has been determined that E. chrysorrhoea Linnaeus, 1758 species, has been found in a cyclical manner for 4-6 years, and in the region for the last four years in a row, mainly in pine tree species and in some fruit trees and products grown in gardens, causing a high level of damage. It is seen that especially abiotic factors cause very important effects on the increase in the population number of the living thing, and the effect of increasing climatic changes in recent years is great. Biological control methods can be effective against this harmful species; it is suggested to be used as an important control method to balance the pest population by ensuring the release of bird species (stork, starling, finch, etc.) and some parasitoids belonging to the region. It has been determined that the chemical control methods used extensively by the agricultural producers in the region make the pest more resistant in the following years, cause the death of many living species (mass bee and bird deaths, etc.), and cause loss of quality of other cultivated plants together with commercial beekeeping activities. 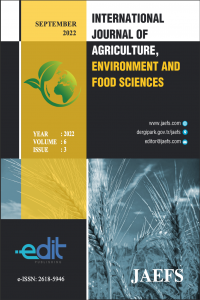