Sufficient and balanced nutrition is needed for the sustainability of a healthy life. Every society
has its own unique eating habits and culture. The individual develops a dietary culture
depending on the geographical location, climate and agricultural situation of the place where
he lives. Tarhana which has an important place among healthy foods in Turkey produce
different effects on human body depending on the regional differences. The nutrients used
during the production of Tarhanan constitute the basis for the health effect of the tarhhane in
that region. Depending on the food used, the antioxidant is richer or the fiber content is
higher. This review work in Turkey, which are products of the different regions of Izmir
Seferihisar district produced Gummy Tarhana, Kastamonu, Kütahya, Bolu, Cranberry Tarhana produced in Bursa and Zonguldak, Konya produced in the province Beyşehir Tarhana, the

Thrace region produced minced Tarhana, Immigration produced in the Marmara region
Tarhana, the Maras Tarhana produced in KahramanMaras province and the grape tarhana
produced in Tokat province. According to the researches examined, the biological effects of
the tarhana on the human body depend entirely on the properties of the food grown in that
region and the methods of storage used in the production of the tarhana. It is necessary to
develop tarhana, which has an important nutrition for each age group, with new researches
that enrich with different nutrients grown in different regions and examine the effects on health
and to carry out these researches on different nutrients having an important place for our
country like tarhana. 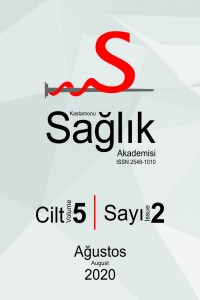 Health Academy Kastamonu is included in the class of 1-b journals (journals scanned in international indexes other than SCI, SSCI, SCI-expanded, ESCI) according to UAK associate professorship criteria. HEALTH ACADEMY KASTAMONU Journal cover is registered by the Turkish Patent Institute.