The Turkish Yearbook of International Relations

‘Soft Tensions’ on the Eastern Mediterranean and Reflections on Turkish Diplomacy: Meis and Samos Island Cases in the 1920-1930s

This study focuses on the diplomatic responses of Turkey to the power struggles on the Eastern Mediterranean during the interwar period. After the Lausanne Treaty in 1923, Turkey had to tackle with the unsettled territorial border questions with the Great Powers. Specifically, the Mousul dispute with Britain and Alexandria dispute with France have long been discussed. However, the maritime border questions in the same period have not attracted much scholarly attention. Taking into account the delicate balances on the Aegean Sea and its significance for the Eastern Mediterranean politics in the interwar period, this study analyzes the diplomatic responses of Turkey to this issue. Two major ‘soft tension’ cases on the Aegean are examined in depth in reference to the historical sources, namely the Meis Island (Castellorizo) tension with Italy and Samos incident with Britain. These cases are elucidated in the framework of the “soft tension” notion, which is introduced to the literature as a new analyical instrument. The Turkish diplomatic attitude in regard to these maritime tensions is described in reference to a position which is called “defensive proactivity”. It is argued that managing these soft tensions with the Great Powers during the critical atmosphere of the interwar era contributed to the diplomatic competences of Turkey as one of the new actors of the international order. So that it was able to follow a more competent strategy during the Second World War. 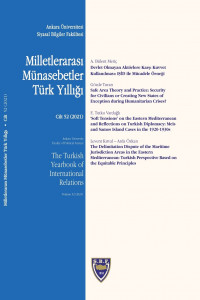