The main objectives of the study are to measure the basic knowledge and awareness of the residents of Izmir on disasters and to generate numerical data for the regional disaster plans to be made by public institutions and organizations in the light of these data. For this purpose, after explaining the definitions of disaster in the national and international arena, the results of the survey interview with the residents of Izmir are given. The study is based on the examination of written documents, which is accepted as a qualitative research method, and the survey methods, which is a quantitative research method. Within the scope of the study, it was concluded that the basic disaster knowledge and awareness level of the residents living in Izmir is low. While the decrease in education level, increase in age and decrease in income level negatively affect the level of disaster knowledge and awareness; there was no difference in disaster knowledge and awareness levels between those who experienced and did not experience disasters. It has been determined that the level of solidarity in the disaster issue is not at the desired level due to the low communication between the residents throughout the province and the widespread secondary relations. It is thought that the lack of information and awareness can be eliminated by methods such as disseminating disaster education programs and exercises throughout the country, ensuring that public service announcements about disasters are broadcast at regular intervals by the media when the viewing rates are highest, and facilitating access to information on disasters.

Disaster, Level of Knowledge and Consciousness, Residents of Izmir Province 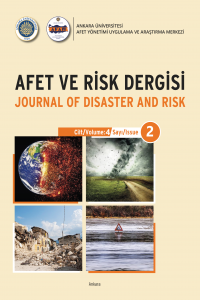