Many areas of traditional production are abandoned and the names and products of the commercial artists, who make these productions, disappear with the inclusion of computerized production. Car painting, which is performed by local artists of the period, is one of these productions. These commercial artists, who are educated in a non-formal way in mentor system, contribute not only to the urban memory and visual culture of the period, but also to determine the painting tradition of region because the artist’s style specified the style of the region. These artists paint cars, horse carriages, tractors and trailers, as well as signage when it is necessary. Considering that horse carriages were disappeared, that traditional production was abandoned and that apprentices were no longer trained, the evidence of the craftship, which almost fade into oblivion, disappear in time.
In this study, the commercial artist Enver Ertaban, who was active in Bursa between the years 1939 and 1999, is discussed. Ertaban moved his fame out of Bursa and found himself a place in documentaries and received visitors from abroad with his talent. With this study, it is aimed to document the life and the productions of Enver Ertaban, who was one of the last representatives of car painting, and to take his place in the literature. 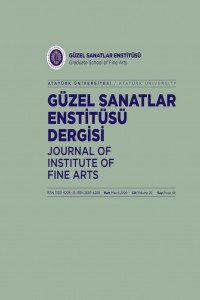