Motifs are the elements that carry the cultural life of a society from past to the present. Therefore, they have served as a bridge between past, present and future. The motifs in handicrafts are silent expressions that convey the thoughts and feelings that the society wants to express depending on the environment and conditions in which people live. Some motifs, especially used in carpets and plain weaves, express the feelings that the weaver cannot express (love, marriage, asking for children) due to the value judgment of the society and makes this idea through the motifs used in their weaving. Therefore, motifs are like a mirror of society. Motifs came with migrations from Central Asia to Anatolia and have been used as a part of Turkish culture in weavings until today. It is possible to group the motifs used in handicrafts as geometric, floral, figured (animal/human), symbolic, depiction and writing. In this study, figured (animal/human) motifs, which are seen as a result of classification of the motifs in the weavings determined as a result of the field study in the Eastern Black Sea Region, were examined. In these weavings, scorpion, dragon, snake, bird, ram, crowbar and human/hands on hips motifs were used, and were supported with photos and drawings. 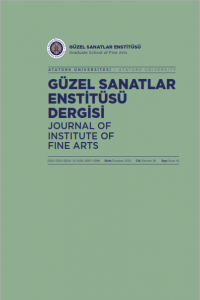