The purpose of this study is to determine pedagogical formation students’ dispositions toward lateral thinking. The survey method is used in this study. The population of this study is 520 students in Bartın and Fırat Universities in Turkey. The sample of the study is totally 408 students from Bartın (129 Students) and Fırat (279 students) Universities. The rate of sample to the population is %78. The assessment instrument is the scale of disposition toward lateral thinking (LATD), developed by Semerci. KMO value of LATD scale has been found to be 0.794 and the value of Bartlett test has been found to be 1585.363 (DF= 36, p=0.000). LATD scale is a unidimensional scale. Having proved to be valid and reliable, the LATD scale has gone through confirmatory factor analysis with the help of AMOS program (Chi-square = 6,744, Sd = 16, GFI = 0.998, CFI = 1.000, RMSEA = 0.000). According to research findings, students have mostly lateral thinking.  There are no statistically significant differences in lateral thinking dispositions of the students according to gender. There is a statistically significant difference between the departments of Science group (Chemistry, Biology, Physics) and “Education of Religion and Ethics” according to LSD as a Post Hoc Tests. 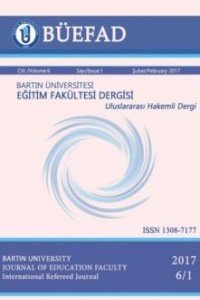 Kapak Resmi İndir
All the articles published in the journal are open access and distributed under the conditions of CommonsAttribution-NonCommercial 4.0 International License