Celebrities in Digital Activism: An Evaluation of ‘Ahbap Platformu’

With the power to speak to a wide audience celebrities can create an awareness in society and mobilization can be ensured by transfering meaning between celebrity identity and an activist purpose. This study is based on the fact that celebrities’ ability to access a wide audience by channeling their activist identity through their social media accounts. This study aims to examine how celebrities reflect their activist efforts and identities in their social media accounts. Haluk Levent’s official Twitter account, who’s been considered as an activist celebrity, is examined using the purposive sampling. This sample was chosen because of his popularity due to celebrity activism, and his
growing ability to reach more people. The content analysis technique was used. The analysis was limited to the period between 15.10.2018-15.12.2018. As a result of the study, the majority of the retweets belong to the ‘Ahbap Platformu’. In this context, he highlights the work of volunteers, associating his personal brand and the organization. He has tweeted about various social issues, notably ‘Health’. The tone of the text appears to be mostly warm in both the activist and non-activist content. According to the celebrity activism model, his Twitter activism can be categorized as ‘Spokesperson’. 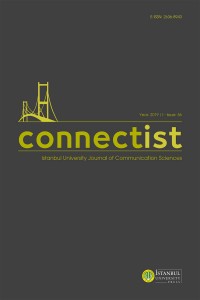