A narrative that forbids tafsir based on reasoning is included in the various sources, notably tafsir literature. This narrative which has the meaning of “Whoever commentates on the Qur’ān based on his own reasoning then let him get ready his place in the fire” is attributed to the Prophet. It is seen that different approaches and views related to what is intented in this narrative are arised from early periods. One of the approaches rejects the validity of the narrative. Another approach supposes that tafsir should be based on the reports narrated by the predecessor. However, prevailing opinion is about that only a special type of tafsir is banned, but tafsir based on valid conditions is permitted. According to them, tafsir based on one's own reasoning or corrupted ideas of his sect without relying on necessary proofs and sciences is banned in the narrative. All three approaches asserts credentials from verses, narrations and reason. In the paper we will specially research how those who had accepted the third approach explained the narrative, on which proofs they grounded their ideas in this process and how they evaluated the credentials of others. Additionally we will draw attention to some problems included by his approaches and evaluate them. 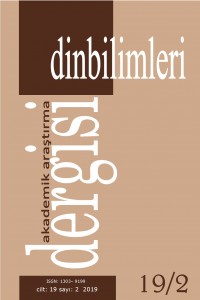