perfringens (Cl.perfringens) in minced poultry and beef sold at retail in Afyon. The contamination level of Cl.

perfringens was detected by Most Probable Number (MPN) method. A total of 100 samples, consisting of 50 raw

minced poultry meat, and 50 minced beef were collected from various retail stores and butchers. Our results

and 3.5 MPN/g, respectively. In our study, it was determined that the increase in air temperature results in increase in 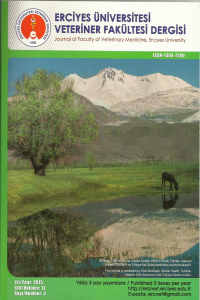