Use of methodology in turkish public administration research

Use of methodology in social sciences is increasingly being important since appropriate use of methodology contributes significantly in producing knowledge to any given area of study. Scholars of public administration need to focus on big questions to enhance their field as a science. Data and use of methodology are important and helpful to answer these big questions. This paper provides a broad perspective for Turkish public administration research. In this sense, the study includes an attempt to search answer for the question of “What is the current situation of public administration research in Turkey?”. There are also some essential sub-questions: Who are publishing articles in the Review of Public Administration (Amme İdaresi Dergisi) journal? Academicians and practitioners? It is important to find out the relation between practitioners who are in the field and academicians who use both theory and applied research in their studies. What are the main research topics of the public administration articles? Are these articles building theories or testing theories? What are the focus of these articles? Are there efficient research methods in these articles? What are the research steps? Are these researches funded by an institutions or other type of supporters? What kind of methods, experimental analyses or statistical techniques are applied in these articles? What type of data and unit of analysis have these articles? Data for this study were gathered from a content analysis of published articles in the Review of Public Administration (Amme İdaresi Dergisi) journal in Turkey.  This journal is the only one in the area of public administration which is indexed in Social Science Citation Index (SSCI). To analyze the data, T and Chi Square tests are applied. In order to explain strength and relation between different variables Levene’s test, Chi Square test and Phi (Coefficients) analysis methods were also applied. Around 700 articles, which were published in the journal during the 20 years between 1990 and 2009, were reviewed. These articles were coded in terms of descriptive information and their methodology usages. General information about the authors includes the number of authors, institutional information/affiliation of authors, academic degree of the first authors, and funding resources of the researches. In order to analyze (i) main research topics, (ii) the area of research, (iii) theory testing, and (iv) general approach, the study benefited from the methodologies of Stallings and Ferris (1988) and Houston and Delevan (1990). The findings, which are gathered by the study, are compared and contrasted with the similar studies in the literature, and then convergences and divergences were discussed. In addition, the public administration theory and research were evaluated together. There are some main findings of this study: (a) There is an increasing tendency in the number of authors within the articles published between 2000 and 2009. This means that authors from different areas and professions come together for academic research. (b) The first authors of the articles are mainly academicians, not practitioners. (c) During 1990s, topics within the majority of the articles were closely related to the area of public administration. In the next ten years, the number of these articles increased slightly. (d) The number of empirical studies in the articles increased between 1990s and 2000s, however, this increase is less than the number of empiric studies in the journals (like Public Administration Review in America) in Western countries. Many of the articles in Review of Public Administration journal lack qualitative and quantitative data. (e) Majority of the articles used statistical techniques for single or two variables. There are some articles which applied T test for one or two samples. In addition, there is only a small increase in the number of articles which used T test throughout 20 years between 1990 and 2009. In many articles, there are crosstabs, Chi Square, Mann Whitney U and T tests. (f) The number of articles which used primary source of data instead of secondary data has increased slightly between 1990 and 2009. (g) Majority of the articles used ‘individual’ as unit of analysis. In Summary, when articles in Review of Public Administration journal were analyzed carefully, it was found out that these articles were not very developed in terms of theory-building. Theory-building and research approaches within articles in Turkey are weaker than the ones in America which were published twenty years ago. Because there are some basic problems in the articles in Turkey such as a lack of clear theoretical and conceptual framework, ineffective research design, lack of qualitative and quantitative techniques. These findings illustrate that the use of methodology in fields of public administration in Turkey is quite less than Western countries. 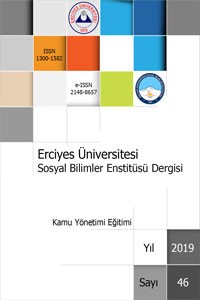