Investigation of OvHV-2 virus in small ruminants in Western Turkey

Malignant catarrhal fever (MCF) is a fatal disease of ruminants and has a worldwide distribution. The MCF virus (MCFV) group has currently known to contain 10 members. Ovine gammaherpesvirus 2 (OvHV-2) is one of the members of MCFV group and has economically importance in cattle. Sheep is the reservoir host of OvHV-2 while domestic goat is naturally susceptible species, although infection is generally asymptomatic in goat. In this study, the presence of OvHV-2 was investigated in sheep and goats by hemi-nested PCR in Aegean Region of west Turkey. Total of 138 sheep and goat samples which consist of 73 whole blood, 39 internal organs and 26 aborted fetuses were investigated. Thirty-seven blood samples, four fetal samples, and seven internal organ samples were found to be OvHV-2 positive. While 45.1% of the total sheep samples were found to be positive, only one goat sample was found positive. Similarly, previous studies have showed that prevalence of OvHV-2 in goats lower than sheep. 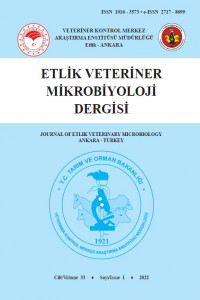