THE NEW IDENTITY OF A INSTRUMENT FROM CENTRAL EUROPE TO ANATOLIA: CHERKES MIZIKASI

A large part of the Circassians, Abkhazians, Ossetians, Karachay-Balkarians, Chechen-Ingushes and Daghestanians of the North Caucasian people, who experienced the greatest exile and migration in the 19th century, were placed by the Ottoman State in the Balkan geography from 1864 onwards. By the end of the 19th century, immigrants from the North Caucasus, who were brought from the Balkans and placed in Anatolia, brought a new instrument with them. These people, who are nested with music and dance in their social lives, have adopted this new instrument. This Central Europe originated and diatonic key-bellwether instrument, generally in Turkey called "Cherkes mizikasi", pioneered the recreation of their own dance and music by the Caucasian immigrant people.

In this report we will discuss; how the music and dance made with this new instrument enabled Caucasian immigrants to form their new identity, how it helped them to unite around this "Circassian" identity and how these immigrants around this new identity, also unite with this new instrument, around musical, cognitive, sensual and aesthetic values.  Sample images and melodies given in the study were added at the end of the paper via QR codes. 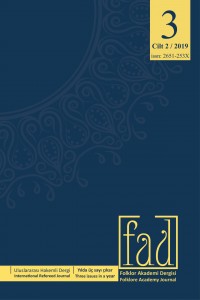