Effect of Amifostine (WR-2721) on Bacterıal Translocation After Burn Injury: An Experımental Study

Objective: Disruption of the intestinal epithelial barrier has been shown to occur following burn injury. This process can lead to translocation of pathogens from the gut lumen to the systemic circulation and distant organs thereby increasing the risk for sepsis. The aim of this study was to examine the effect of amifostine (WR-2721) on bacterial translocation in a rat burn injury model.

Material and Method: A total of 27 male Wistar albino rats were divided into three groups of nine. Group I was a control group. Group II and Group III was subjected to third-degree burns over 30% of the total body surface area, and group III was administered amifostine 200 ml/kg intraperitoneally, followed by a 10 ml/kg/day maintenance dose after undergoing third-degree burns. After 48 hours, tissue and blood samples were obtained and cultured from the liver, spleen, mesenteric lymph nodes, and cecum. 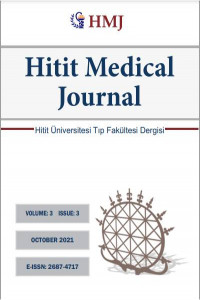