With the rapid urbanization movements seen around the world, there is an increase in the building stock. This increase is more evident in medium-sized cities that receive immigration and are developing. Cities are directly affected by the increasing regional and global warming with the building stock. At this point, the question of how cities will cope with climate change comes to the fore. It is seen that the studies on how the building stock formed by the housing construction, which gained momentum in the 2000s in Turkey, perform in the current climatic conditions and how it will perform when the changing conditions are taken into account, is seen to be insufficient. Therefore, this research article aims to investigate the performance and comfort conditions of the building stock, which has increased rapidly in urban areas in recent years, taking into account the current and future climatic conditions. Tokat, a medium-sized city, was chosen as the study area. As a result, a strategic emergency action plan proposal for cities in the context of combating the changing climate, adaptation and measures to be taken, and a model of the Tokat city climate change action plan preparation process steps model were presented. It is aimed that this study, which is carried out on a medium-sized city, will be used as a guide by other cities in urban design compatible with the changing climate. 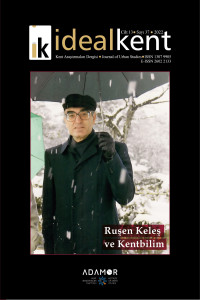