Anti-Religious Publications and Reasons for Atheistic Orientations Among Youngsters

The aim of this study is to investigate the relationship between the atheistic thoughts of the youth and to discuss their effects on youth. Atheistic movements can easily reach people in today's communication world and it especially affects young minds. These publications reject the existence of a creator, the life after death, and the relationship between religion and morality, and reduce life only to this world. These kinds of publications destroy young people's belief world and cause people whose religious knowledge level is not enough to move away from religion. The determination of the projections of anti-religious movements in youth beliefs is important in terms of theology. This will be useful both in directing religious publications and in understanding the current problems of the science of theology. In this article, the analysis of the content of atheistic publications that merge in the anti-religious denominator and which are especially aimed at young people and the rationale of young people towards atheism has been examined. The study will help us to understand which motives the young people turn to atheistic views. For this, interviews were conducted with the qualitative research method and the factors affecting their beliefs were tried to be determined. 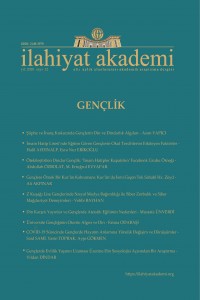