Culture of Fear In Schools Scale: Validity and Reliability Study

The aim of this study is to develop a scale to determine the level of fear culture experienced by teachers in schools. For the purpose of this study, a 32-item pool was created by researchers in the context of literature review and teacher opinions. These substances were examined with field expert and measurement assessment specialist and the number of items was reduced to 29. Based on the opinions obtained from 20 experts for the candidate scale, it was decided that 8 items should be removed from the scale and a 21-item, 5-point Likert-type scale was created. The resulting scale was prepared as an online form. The prepared form was delivered to teachers by using e-mail and other communication tools and feedback was received from 320 teachers. As a result of the exploratory factor analysis conducted to determine the construct validity of the scale, it was determined that the scale consists of 3-factor structure explaining 64,662% of the total variance. It was concluded that factor structure was appropriate with confirmatory factor analysis. In order to verify the criterion validity of the study item-total test correlation, t-test between the upper and lower 27% groups were examined. "Climate of Fear Scale" was used for similar scale validity. In order to determine the reliability results, Cronbach's Alpha values were examined according to the sub-dimensions and total score of the scale and it was found that these values ranged between 0.80 and 0.92. Fear culture level can be determined in schools by taking the total score of the developed scale.

Why do teachers fear? Examining teachers' perceptions of the culture of fear through mixed methods research 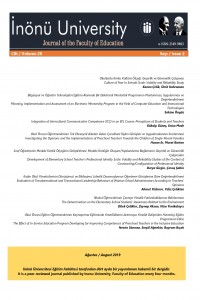