A New Approach Proposal: Sociological Projections of Food in the Context of Stratification Theory (Karabük Case)

In this study, “Stratification Approach” which was systematized by the resesrcher was used as it includes the forms which try to protect the specificity of food culture. The stratums were determined in three main categories as “refional cuisine”, “local cuisine” and “fastfood cuisine”. The categories were made with the consideration that a new approach form is presented to the literature of food sociology. This study was conducted with the qualitative procedure. Accordingly, the semi-structured interview, observation and literature review were made as the method of data collection. It was conducted by the criteria of purposive sampling in the study, and it was structured with the data of interviews which were made with 28 persons in three different groups as the maximum diversification sampling was preferred. In the research, it was designed as the main problematics to query about how the relationship that the food has with the cultural memory occurs and what vehicles it occurs with, what interpretations accompanies with the person while developing the relationship with the food, what the views come in as the place transforms the food. In the study, it was determined that the regional cuisine gets lost its specificity while being touristic and reveals the new syntheses when it is compared with the local cuisines. In the study that the foods in the touristic places gradually resembled each other, and it got lost its historical roots, it was defined as Mc-Being Chinese. The synthesis views which occur in the local cuisine were evaluated as the main extension of standardization and it was emphasized that it transforms the place into an authentic museum where the regional one is exhibited. In the fastfood cuisine stratum, it was associated with the changings that the globalization and university create in the city. This context reveals the result that the traditional food places disintegrate and the relationships around the food change. The changings that foreignnational university students created in the city were described with emphasis on the existence of places where were opened for them. The study is a distinctive one because it revives the telescopic forms of regional, local, national and global cuisine practices through “the stratification approach, and as it has a suggestion to present a new perspective. 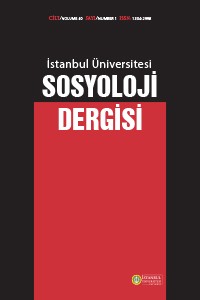