Journal of Tourism Intelligence and Smartness

The fact that Anatolia has hosted different civilizations throughout history ensures that each region offers historical, cultural and religious artifacts. Malatya, which is under the rule of Hittite, Assyrian, Urartu, Persian, Komagene, Pontus, Selefkos, Roman kingdom, Byzantine, Seljuk, Mamluk, Dulkadiroğlus and Ottoman state, is a province that contains various artifacts and structures. Battalgazi, the first settlement of Malatya province, has rich religious resources. In this direction, the main problem of the research is why the potential cannot be evaluated in terms of faith tourism and there is not enough academic research on the subject. In the light of these explanations, in this research it is aimed to reveal the faith tourism potential of Battalgazi district by examining it. In the study, it was tried to reach the findings by interviewing 11 people who have an idea about the subject, including the public administration and the private sector. With the SWOT Analysis prepared in line with the data obtained, 5 main themes and 53 sub-themes were reached. Accordingly findings, it has been seen that Battalgazi has rich works such as a cupola, tomb, mosque, namazgah, and madrasah, but it remains in the background due to insufficient promotion, advertising and investments. In addition, it has been reached that Arslantepe Mound, which has entered the UNESCO World Heritage Permanent List as of 2021, creates an opportunity for faith tourism in the Battalgazi district. 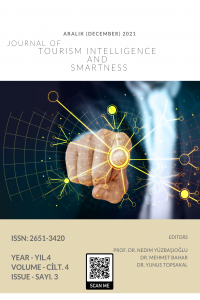