The number of individuals who have adopted a vegetarian/vegan diet with ethical, ecologic, health, religious, and such motivations is increasing day by day. This has become a notable issue concerning the food and beverage sector. This study, which was conducted to determine the choices of vegan/vegetarian people regarding food and drink enterprises and to reveal the problems they have experienced, was conducted with 19 vegan/vegetarian individuals who visited the third Didim Vegan Festival organized by Didim Municipality. Face-to-face interviews were done with the participants and the data obtained with the semi-structured interview form prepared to serve the purpose of the study was evaluated with descriptive analysis which is used in qualitative analysis methods. It was determined from the data obtained during the research that individuals experienced significant differences in their life after they became vegetarian/vegan. The most important criteria for vegan/vegetarian individuals in choosing the food-drink enterprise is the necessity of the enterprise to be ethical and environmentally conscious. The most significant problems these individuals face in food and drink places include the food prices being high, them having trust issues towards the enterprises, and the personnel having insufficient knowledge regarding the content of the menu. Suggestions for the solution of the problems vegan/vegetarian individuals experience regarding the food-drink enterprises were made in the results of the study. 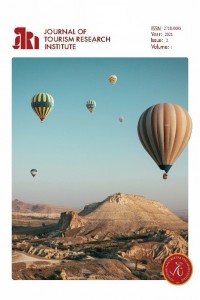