In our article, we handled and evaluated the subjects of social and economic structure of Kuzay Region of Posof District (Sanjack) in Çıldır Province according to cadastral recording book named "Survey Register of Georgia Province" ("Defter-i Mufassal Vilayet-i Gürcistan"). Accordingly, there were 3 Rabat Castles, 27 villages, 2 farmsteads. There were a total of 363 residences. In the study, another subject is the adopted tax system and amount of taxes that were collected in Kuzay Region. In Kuzay Region, there were mainly barley and wheat production, and also sheep and pig breeding and beekeeping were developed. Linseed production factory and water mills operated as small industrial facilities in the region. At the end of our study, texts in modern Turkish transcript translated from Old Turkish (Ottoman) and written in Arabic alphabet of Kuzay region in Posof District have been presented. Key Words: Childir Province, Posof District (Sanjak), Shadowy (Kuzay) Region, Rabat Castle, Water Mills, Creamery 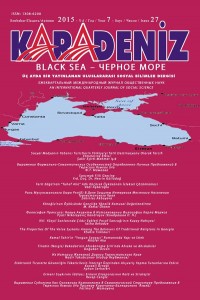