With the declaration of the Republic, the government, which entered into a total modernization process, struggled for the change and transformation of social life with all its potential. In the creation of a public space in Çanakkale, which has the appearance of a small city by the sea, the use of the coastline appears as the spatial application areas of the modernization practice. In the study, rather than analyzing the public space and daily life in a theoretical manner, there will be a discussion about the contributions of spaces, such as restaurants, family tea gardens and city clubs, into daily life, which had an impact on the development of entertainment culture and were used in daily life in the republic period in Çanakkale. In addition to the city club, where the relations of the upper classes with the political power have developed, spaces, such as a community center, restaurant, fair, family tea garden or casino, have also been distinctive spaces in the daily lives of the citizens in the city. The spaces that the citizens go are actually the spaces of class representation, beyond just having fun or socializing. Therefore, these spaces provide clear clues in terms of revealing how the people of Çanakkale spend their time in their daily lives and what kind of relationships they have established with each other. Based on these clues, one of the main objectives of the study is to determine to what extent the modernization moves of the republic have been achieved in the city. 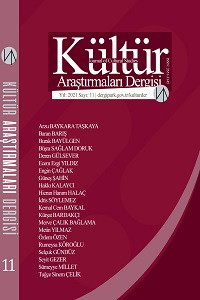