KURDISH WORKS WRITTEN ON THE FIELD OF ISLAMIC JURİSPRUDENCE

Language is the most important communication tool that human beings have. People express their feelings and thoughts in the language they speak. There are hundreds of different languages in the world. Kurdish is one of these languages. Some of the people who speak Kurdish express their opinions and beliefs in this language, which is their mother tongue. With the advent of the religion of Islam, the Kurds mostly adopted this religion and tried to survive in line with his orders. As in other nations, many works were written in this field in order to explain the orders of the Islamic religion more easily among the Kurds. In this study, after determining the works written in Kurdish in the field of Islamic Fiqh, we will evaluate them and present their results to the world of science. 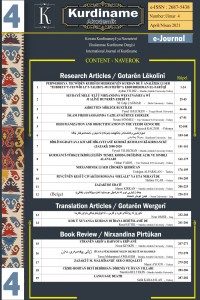