Individuals have carried out various activities to continue their lives since the first appearance of humanity. These activities have had a negative impact on the environment since the ancient times. Although the population and the damage caused by these activities were relatively low in the ancient times, human activities were diversified as a result of the industrial revolution. This diversification and the increase of industrial intensive technologies have increased greenhouse gases in the atmosphere and the phenomenon of climate change has emerged as a result of the impacts of these gases. Climate change is defined as the changes that occur in the global climate as a result of the disruption in the composition of the world atmosphere by human activities or natural ways. Human-induced climate change has affected environmental balance mechanisms negatively by damaging the ozone layer with the effect of greenhouse gases. Failure of these mechanisms to fully function causes the Earth to heat up rapidly as a result of human actions, thin the ozone layer and compromise sustainability. Individuals' health problems will increase day by day in case current climate change and warming trends continue. Psychological disorders that are likely to occur as a result of increasing heat related conditions such as diseases and deaths, respiratory diseases caused by air pollution especially amongst individuals with chronic diseases over a certain age are one of the primary health problems. In this study, the negative effects of climate change will be emphasized in the light of the data found in the national and international literature, and the psychological effects of climate change on human health will be emphasized. The main purpose of the study is to prepare the ground for future studies and increase social awareness by conducting a study about the link between climate change and psychology which is seen as missing in the national literature. 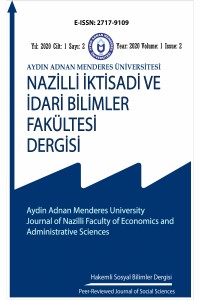