To understand the daily life practices of young people and the cultural values that make up these practices, classifications that were different from each other have been made in social sciences. These classifications come before us in many different areas that range from consumption habits of young people to their psychosocial cognition levels, sometimes supporting each other and sometimes in the form of classifications that opposing each other completely. When the issue is considered in the context of the Islamic world, Muslim youth and Turkish youth, we can see that young people have not recovered from being consumers of technology and science yet. Young people, as it is the case in the West, follows technological developments in an extremely fast manner and show a competitive appearance in terms of consumption. However, they cannot show the same competitive attitude in producing science and technology at an adequate level. Technological developments play a key role in the transformation of young people. One of the easiest and cheapest areas for access in technological developments seems to be the social media. In this context, it is important to know the role of the social media in the lives of young people and to estimate the orientation of them. Many studies show that Turkish young people use the social media in an extremely active way. Young people, who can have instant access to social media accounts through their smart phones, use social media for different purposes ranging from political participation to entertainment, from culture-art, to and to leisure activities. Although the reasons of young people for using social media have very different aims, it has a modifying/transformative effect. This effect will increase and differentiate in time. In this respect, the focus will be on how culture produced by society in various ways is re-produced through social media, and how cultural behaviors of young people change as a result of this production in the present study. 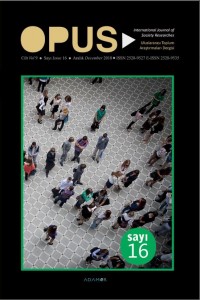