Classroom teaching, considering the population they address, is a field of profession that constitutes a role model for students and contributes to the habits they adopt. In this sense, the nutritional habits of classroom teachers also constitute a significant point. This is because, when teachers have a correct and regular nutritional habit, they can instill this habit in students. In this study, it was aimed to investigate the nutritional habits of classroom teachers. The nutritional habit survey, prepared in line with this aim, was conducted with classroom teachers. In the data analysis, SPSS package software was used and percentage, frequency, standard deviation and arithmetic mean tests were conducted. According to the results of the study, a majority of the teachers stated that they did not receive nutritional training, did not have smoking or drinking habits in addition to not doing any physical activity. Approximately half of the participating teachers in the study reported that they do not have a habit of having breakfast and they skipped meals as well as reporting that the most skipped meal was the lunch. The teachers, as the reason for skipping meals, stated that they skipped meals because they could not get the chance. A majority of the participating teachers in the study also stated that they consumed less than two liters of waters in a day and they consumed less than five or six cups of tea or coffee in a day. As a result of the study, it was observed that the nutritional habits of teachers and the level of their knowledge were insufficient. 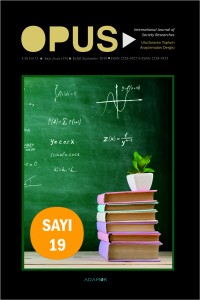