A Research of Perception on Industry 4.0 and Its Reflections to Economy

Modern economics today focuses on the analysis of the historical and economic trends of the development of society, with breaks and/or transformations in the course of both theoretical and historical development. It is thought that the long-wave cycles of innovation that started with the Industrial Revolution created the development from Industry 1.0 to Industry 4.0, and that production, consump-tion, workforce, education and technology are changing rapidly, the connections between sectors and countries differ, and define a new process in coordination with digitalization. The process called Indus-try 4.0 is important in terms of its impact in many areas, from production to development, thanks to its advanced technology possibilities. In this respect, the contents arising from the definition of industry 4.0 indicate the magnitude of the impact in the economic field, especially as they provide integra-tion on the structure that constitutes the whole of the economy. The importance of the industry 4.0 perception level of the young population, which can be expressed as the society of the future, is emerging in terms of a society that can solve many economic-social-social difficulties by integrating science and technology in both different industries and social life in order to balance economic development and solve social problems. In this context, the aim of this study is to measure the perception formation in line with industry 4.0 and its the economic reflections. The study was conducted in the qualitative design and the data was received by using a semi-structured interview survey to the new graduates of economics in SDU. In the study, based on the data obtained in the study, the main notions are determined with the connotation sign technique. Phenomenology is also used as a method in terms of revealing the relationship between them with other notion and the schematic representation of the unifying nature of these notions. According to the analysis results, the main notions of mind and concept minds in the study such as business intelligence, innovation, digital transformation, artificial intelligence, entrepreneurship, smart factory-production-product, innovative application in education, R&D and collaboration have been interpreted within the scope of industry 4.0 and its reflections in economy. 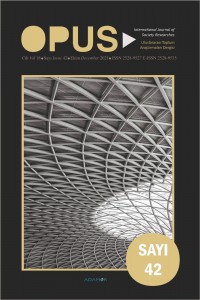