Power struggles in the narration of the past through translation

This study seeks to analyze the counter narratives in Captured at Kut: Prisoner of the Turks (2008), which tells the memoirs of an Englishman captured by the Ottoman, and its Turkish translation titled Esir Bir İngiliz Doktorun Kûtülamare Anıları [Memoirs of Kut by a Captive British Medical Doctor] (2018) as manifested in footnotes from a Translation Studies perspective. Captured at Kut relates the experiences and observations of Regimental Medical Officer W. C. Spackman in the Mesopotamian Campaign, from the English invasion of Basra through the siege of Kut, as well as the seven months he was held as a prisoner of war. Since Spackman was a medical doctor, he was considered to be on parole, which gave him a chance to observe local people and customs in the region. He wrote about his experiences like a “traveler” (W. C. Spackman, 2018), and his memoirs were published posthumously by his nephew, Anthony Spackman. In his preface, Anthony Spackman states that he did not alter “the structure of the narrative, nor any of its essential details” but “attempted to clarify […] and rephrase” the narrative when necessary (2008, Preface). However, Mesut Uyar, the editorial consultant of the Turkish translation, states that authors of works of this nature are “biased actors” (2018: xx), and they offer incomplete information about the events. This statement of Uyar is considered significant to scrutinize the work within the context of Translation Studies. This study attempts to provide a descriptive account of how the narration of the past transforms into a power struggle in translation based on the footnotes that can be associated with Uyar’s above-mentioned claim. 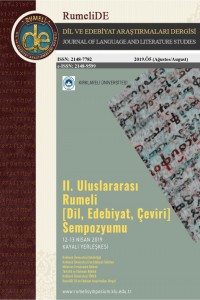