Ayla Kutlu, who stepped into the world of literature with her blurbs in the second half of the 1970s, is known for her novels, stories, and books for children in Turkish literature. The author sheds light on specific periods of Turkey in her novels and stories, in which she discusses the social and political changes that Turkey has undergone during its historical process. In her works, which include the reflections of tradition and modernism together, she attracts attention with her clear language, observation power, and psychological analyses. She also describes the individual and her/his crisis, who is shaken by political conflicts, social turmoil, and issues. Her novel, Kaçış (Escape), published in 1979, also addresses the adventure and crisis of the modern individual around social issues and traditional phenomena. In the novel, the author reveals the fears, conflicts, and mental states of the characters because of modern life. While doing all these, the author includes modernist novel concepts and themes in her work. In this sense, the novel tells dilemmas of the modern individual around the themes such as questioning, crisis, escape, loneliness, alienation, and uncertainty. In this study, Ayla Kutlu's novel Kaçış has been examined in terms of themes specific to the modernist novel in the context of the reflections of modernism. The study first gives information about modernism, modernist art, and modernist novel and focuses on the content, expression, and technical features of the modernist novel. Then, it gives brief information about the author’s art life and works and touches on her interest in the modernist novel. Following this, the study assesses the novel Kaçış, which is the subject of the article, under various titles in the context of modernist themes. In the light of the findings in the conclusion part, it assesses the content and thematic aspect of the novel. Kaçış, a novel in which the characters are in the center, is a work that reflects the psychological state and complex states of the modern individual(s) and processes them based on modernist themes such as escape, crisis, alienation, loneliness, questioning, uncertainty, non-communication, fear, and doubt. 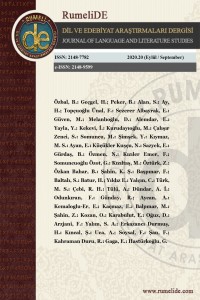