That’s Our Factory: Representation of Working Class in Karanlıkta Uyananlar

﻿This paper examines the representation of the working class in Ertem Göreç’s film Karanlıkta Uyananlar (1964), assessing how the general characteristics of the working class and workers are described, as well as the forms and tools of the struggle of these workers. The analysis takes a Marxist approach, focusing on the phenomena of class and class struggle, the process of class struggle, the worker and the forms of workers’ struggles. The film Karanlıkta Uyananlar, concerned with the economic problems of workers and the struggle of the working class, bases itself in the historical and social structure of the society and positions itself in favour of collective approaches to action and social mobility in contrast to individualistic ones. In both its subject matter and its treatment of the working classes, this film was a first in Turkish cinema. 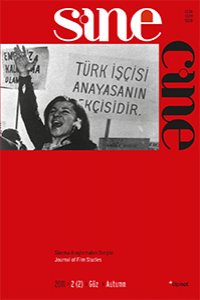