ADAPTATION OF THE MINDFULNESS INVENTORY FOR SPORT INTO TURKISH: A VALIDITY AND RELIABILITY STUDY

The objective of the current study was to adapt the Mindfulness Inventory for Sport (MIS) developed by Thienot et al. into Turkish on a group of university student-athletes. For the linguistic equivalence study, initially, the English-Turkish and Turkish-English translations were done by experts, then the master students in the English Language Teaching Department, 4th-grade students of English Teaching Department, and English teachers were incorporated in the study. Correlations between English-Turkish and Turkish-English forms applied at two-week intervals were found to be positive and significant. As a result of exploratory and confirmatory factor analyses applied to determine the factor structure of the MIS, it was observed that the original structure of 15 items consisting of awareness, non-judgmental, and refocusing subscales was similar. In order to ensure parallel forms of validity, the Mindful Attention Awareness Scale (MAAS) was used. A significant correlation was found between MIS and MAAS at .64 (p <.01) level. The Cronbach’s alpha internal consistency of the scale was calculated as .82. There was a high positive correlation between the first and the second application according to the test re-test results of two weeks interval of MIS (r = .89, p <.01). The 15-item scale was separated from the odd-numbered items and the even-numbered items, and it was found that r = .80 as a result of the split-half reliability test. As a result of the present study, the Mindfulness Inventory for Sport (MIS) was determined as a valid and reliable instrument in Turkey’s conditions. 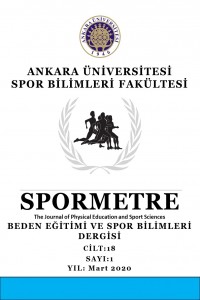