From the early ages, disputes over the interpretation of the Qur’ān brought along discussions about the method for properly understanding the Qur’ān. Ulema addressed the problem of the scope of Qurānic verses in the classical period as a further extension of the method research. Keeping in mind that ver-ses are verbal addresses, most of the methodologists agree that the verses will only cover the addres-sees at the exact moment of the address. They claim that subsequent addressees will not fall directly into the scope of this address. This discussion in the classical period is associated with the historicist approach, which is thought to allow a better understanding of the Qur’ān. Accordingly, it is claimed that the historicist approach existed in the classical period in its essence and the universality or locality of the provisions in the verses was also discussed in the classical period. In this article had been aimed to scrutinize the nature of the aforementioned discussion in the classical period that is associated with the historicist approach. For this aim, in the article has been analyzed the content of the above-mentioned discussions of the methodologists. While an important part of the methodologists agree that the verbal address covers only what exists at the exact moment of address and that it is not per-missible to address the non-existent, the theological, epistemological, linguistic and logical reasons had motivated them to adopt this view. In the context of this discussion, they hadn’t discussed the univer-sality or locality of the provisions. They had accepted the provisions to make the later addresses res-ponsible. According to the historicist approach, it is known that the provisions cannot be applied li-kewise to later addressees. Accordingly, there is a serious difference between the historicist approach and the aforementioned adoption. When methodologists restricted the address only to the first add-ressees they had neglected that adopted reasons may require assigning the provisions only to first add-ressees. Therefore it had been noted that the address of the Qur’ān had taken the context of revelation into account and that the provisions in the addresses may be related to the first addressees in this artic-le. 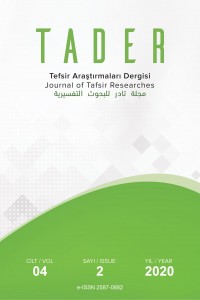