The sharḥ-ḥāshiyahs, which were mostly seen intensely after the 7th century in the history of tafsīr, formed an important circle of tafsīr literature. The two most important tafsīr texts on which the ḥāshiyahs were written are al-Zamakhsharī’s al-Kashshāf and al-Baydāwī’s Anwār al-Tanzīl, which centers it. Ḥāshiyahs made important contributions to the interpretation process of the verses by addressing the expressions of the musannifs (author of the original text) or various issues in the context of these expressions. In this respect, the ḥāshiyah of Bitlīsī, who is both an expert in rational and traditional sciences and an important politician and historian, has a remarkable quality among Anwār al-Tanzīl ḥāshiyahs. In the ḥāshiyah, which is the subject of this article, what kind of attitude Bitlīsī exhibited is important. Because in the ḥāshiyahs, the commentators only exhibit an attitude of explaining the original text, summarizing, conveying or analyzing (tahqīq) the pre-existing views. Each of the aforementioned attitudes is based on a certain purpose or benefit, in the ḥāshiyahs in which the tahqīq attitude is exhibited, the determinations, opinions and claims in the original texts and the ḥāshiyahs written on them were analyzed sometimes in terms of comparing and reasoning, and sometimes in terms of resolving, criticizing, strengthening, opting, detailing or attesting. By doing this, the ḥāshiyahs have a quality that contributes to the existing knowledge and ultimately to the interpretation of the verses. For this reason, it has been determined in the article what kind of attitude Bitlīsī exhibited in the annotation by descriptive method and comparative text reading method, and it has been tried to reveal what feature the ḥāshiyah has. Before that, information was given about the ownership of the ḥāshiyah to the author, its technical features and resources. 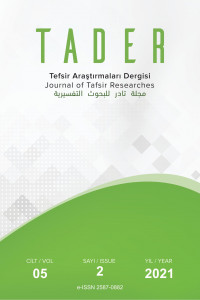