Cities are settlement units with complicated and dynamic structures. Due to their dynamic structures concerned, they have always undergone change since their establishment. The subjects of research on urban settlements changed in time, which is parallel to this changing structure of cities. Likewise, in previous years the urban structure and functions were examined within them in the studies on urban settlements, whereas today issues, such as the impacts of globalization on cities, the urban space, and the problems of city dwellers, are investigated and solutions are sought for new urban problems that are increasing day by day. Doubtlessly, with these changing processes, the approaches to the settlement of urban problems also vary. For instance, in the past, urban problems were solved with solutions like the planning of new urban sites. However, the limited new sites likely to be opened for settlement, the consumption of these sites as they were opened for settlement, and the problems experienced as regards the need for new settlement areas to develop in the city brought to the agenda the requirement of providing the city with the existing depressions again through planned interventions, in other words, urban transformation. The urban transformation activities projected within the framework of the example of Bayraklı squatting quarter in Izmir that evidently experiences the process of squatting observed in our country as the source of urban problems will be examined with a critical approach in this study. Within this framework, it will be intended to evaluate the choice of location for the project concerned, the details of spatial use, the advantages and possible disadvantages expected from the project, and the views and expectations of the neighborhood residents living in the implementation area about the project within the framework of the research made in the area. 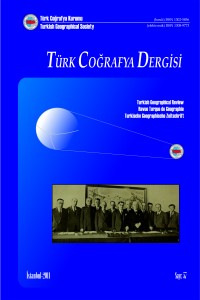