This is a study of sociology of community and sociology of law. It aims to understand communities with is the scope of legal pluralism. The study suggests that self-defense which is a legal concept could play a constituent role for a community. In order to do this, the study focuses on the community of “36 Boys” which was founded in Kreuzberg of Berlin-Germany. Throughout the first chapter, concept and theory, I examined self-defense, and positive-negative obligations of states within the domaine of law and examined community, constituent role of community within the domaine of sociology using the method of literature review. I also referred to verdicts of the European Court of Human Rights on positive-negative obligations. In the chapter on analysis, I used the method of content analysis on interviews of nine founding members of 36 Boys in the documentary, which was shot for TV Channel Al Jazeera and certainly did not digress from the scope of the previous chapter on concept and theory. The study has concluded that “36 Boys” were a community which was founded on the basis of self-defense which could play a constituent role for a community. Considering the lack of methodical studies in sociology of law, I believe this study to be a contribution to the domain. Additionally, this new community built on self-defense, which was recognized by me, is a scientific contribution. 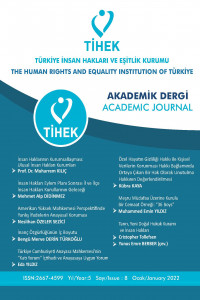