Objective: This study was conducted to determine the mothers’, have 4-6 months old infants, breastfeeding behaviors and infant feeding attitudes. Method: This descriptive cross-sectional study was carried out with 130 mothers who had 4-6 months old infants and applied to three Family Health Centers in Sivas city center for any reason. Data were collected by Individual Characteristics Form, Breastfeeding Behavior Form and Iowa Infant Feeding Attitude Scale. Descriptive statistics, Mann Whitney U test and Kruskal-Wallis test were used in statistical analysis. Results: The mean age of the mothers was 27.57±5,54 and 30.8% of them are high school graduates and 83.1% of them do not work. When their breastfeeding behaviors was examined, 76.9% of them informed after birth. 53.1% of mothers breastfed their infants within the first half hour after birth, 90% of them still breastfed their infants. Mothers’ mean total scores of the infant feeding attitudes were found as 48.20, the mean total score of the mothers living in the nuclear family, working and receiving information about breastfeeding in their last pregnancy was found to be significantly higher. Conclusion: Breastfeeding behavior is common in mothers for the first 4-6 months, but more than half of breastfeeding mothers provide additional nutrients. While mothers' attitudes towards breastfeeding of babies were relatively positive, it was observed that this attitude was not reflected in behavior. Therefore, considering the other factors affecting breastfeeding and infant feeding behaviors, it may be suggested to provide the necessary support and counseling by health professionals. 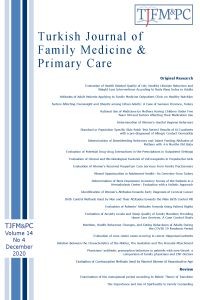 English or Turkish manuscripts from authors with new knowledge to contribute to understanding and improving health and primary care are welcome.