TRT Radios in the Context of Public Broadcasting: Example of TRT Radio 1 and TRT FM

In the second chapter, TRT Radio 1 and TRT-FM radio channel's “2014-2018 of the Annual Report”, 2014-2018 Program Proposal Form’s from TRT radio and the Radio and Television Supreme Council (RTUK)’s radio listening trends (2014) qualitative and quantitative analysis from measurements obtained from the public survey to be made “with the understanding considering TRT radio stations, public broadcasting radio shows on the audience's existing opinions and reviews of published programs” will be presented.

How the contents of the Program are reflected in the “planned and realized” ratios in the annual reports will be examined using the proposal forms. In addition, “Radio Listening Services Organization promotion and Broadcasting Joint Stock Company (RIAK) 2019 audience measurement results” will be compared with the findings and will focus on where public broadcasting in our country is in meeting the needs of society and the necessity and importance of Public Broadcasting. In this respect, data will be made sense by determining which direction listeners ' needs are gaining weight in the new media environment.

The aim of the study is to determine whether TRT radios adapt to the new broadcasting concepts that emerged during the development/change process of the media, and in a sense it is a preliminary study on the future of Public Broadcasting. 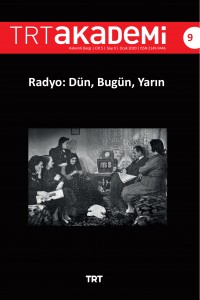