As a result of rapidly developing information, communication and transportation technologies together with globalization, national borders have begun to blur more, and transnational problems have become more visible. Therefore, recently, instead of a narrow geographical understanding of “border”, a border security politics covering a wide geography has been recognized. In this study, artificial intelligence systems, which are widely used against problems such as cyber intelligence, terrorism, human trafficking, drug trade and illegal immigration, are discussed, especially within the scope of new policies and strategies in the field of border security. In this context, artificial intelligence-based systems such as currently used armed/unarmed and unmanned aerial vehicles, weapons with facial recognition systems, smart barriers placed on border lines are examined. Consequently, policy recommendations have been made to build and improve artificial intelligence governance, which have analytical abilities beyond human capabilities such as working with large and complex data, self-correcting, simulating human cognitive processes, and providing feedback by effectively analyzing complex processes from multiple disciplines and stakeholders. In addition, in this study, attention has been drawn to the technical and legal issues that should be considered for artificial intelligence systems. These systems, which have insufficient legal infrastructure, have the risk of getting out of human control because they have superior abilities than humans. 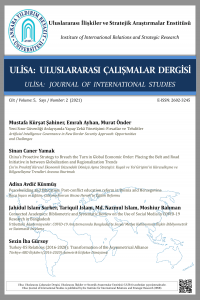