A RESEARCH ON THE ADAPTATION PROCESS OF SYRIAN CHILDREN UNDER TEMPORARY PROTECTION: THE CASE OF ISTANBUL

The popular uprisings that started in Syria turned into conflicts as of 2011, forcing children to immigrate from their country with their families. At this point, it is seen that Syrian children have problems in their social adaptation processes towards the social environment they are in after migration and there are changes in their expectations from their future lives. From this point of view, the qualitative method was preferred in the research and the study group of the research consisted of 20 Syrian children between the ages of 15-17 who were studying in a secondary school in Istanbul. The data of the research were collected by semi-structured interview method. When the findings of the research are examined, it is known that the social adaptation status of children develops negatively due to some differences they experience. This situation leads to the continuation of the feeling of fear and anxiety in them. Children's expectations for the future include the end of the war and the hope of returning to their own country. As a result, it is seen from the research data that there is a need to improve the social cohesion of Syrian children living in Turkey during their stay here. Therefore, it is important to create policies from this perspective. 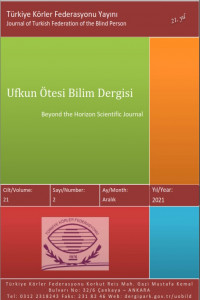