Interactions Between Stock Market and Macroeconomic Factors: The Case of BIST100

The aim of this study was to investigate the relationship between stock and Turkey in particular macroeconomic variables. In this study, the relationship between GDP, exchange rate (Dollar / TL), interest rate, and inflation and the return of the BIST100 Index were determined empirically for this purpose. The quarterly data set used in the study covers between 2003: Q1 and 2018: Q3. In the analysis, as well as the cointegration test which used in order to determine the existence of the relationship between the variables, the causality test were used to determine the direction of this relationship, and the variance decomposition test was used to determine where the shock caused in the variables originated. As a result of the analysis, a long-term cointegrated relationship between BIST100 and macroeconomic factors has been reached according to the break in trend model. In addition, statistically significant bidirectional causality between BIST 100 and interest rate; unidirectional causalities running from BIST100 to GDP and from BIST 100, GDP, and interest rate to inflation, interest rate to exchange rate are detected as a result of causality tests. According to the latest analysis of variance decomposition, the results obtained in the study are in line with the expectations and the literature. Accordingly, it is seen that the interest rate and exchange rate have the strongest long-term explanatory relations with BIST100. In the light of the findings, it can be said that there are important implications for both investors and policymakers.
Key Words: BIST100, Macroeconomic factors, causality, variance decomposition
JEL Classifications: C32, E44, G23 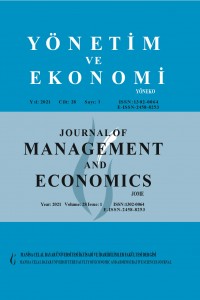