Since the second half of the 19th century, Van has become a city on which the Armenians have claimed rights, and for this purpose, the Armenians initiated media activities in Van. The presence of Turkish-language newspapers was needed both in response to the separatist movements of the Armenians and for the reason Van was a city that preserves Turkish culture; therefore, press activities in Turkish language continued in Van from 1892 to 1915. In this respect Van, in the context of mass media in Turkey has a special position. The main subject of our study is the politics-press relations between the establishment of the first newspaper in the city in 1937 after the proclamation of the Republic and the 1960 military coup. Although the issue of the local press in Van is the subject of many pieces of research, the existence of such a study was needed due to the lack of independent work in the context of politics and local press relations as a result of the literature review. In this respect, the press that continued its broadcasting life in Van in the aforementioned years was scanned. In addition, researches were made in the State Archives on the subject, and information to support the available data was found. An introduction to the subject also made about the works of the national qualifications penned by scanning the local press in Turkey and finally, a project was prepared under the roof of two titles called “One-Party Period Van Politics-Media Relations” and “Multi-party period and the DP Van Politics-Media Relations in the ruling” 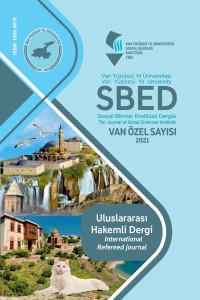