Introduction:  Placental site nodule (PSN) is a cellular proliferation formed by intermediate trophoblasts and has a benign clinical course. It usually diagnosed incidentally  during the reproductive period. The most frequent localization of the PSN is endometrium and uterine cervix, respectively. We herein present two cases of PSN that located at uterine cervix and accompanied to squamous intraepithelial lesion (SIL).

Case:  The first patient was a 25-year-old female. She recently gave birth after a treatment for infertility. During her routine follow-up, a low grade-SIL (LSIL) was diagnosed by cytologic examination of the cervical smear. Then, an endocervical curretage and a cervical punch biopsy were performed. The second patient was a 50-year-old female. During her routine cervical smear analysis, a high grade SIL (HSIL) was diagnosed, and then an endocervical curretage and a cervical punch biopsy were done. Histopathologically, both cases displayed well-demarcated nodules among the cervical tissue. Both nodules were microscopic in size and exhibited cells with irregular nuclei within a hyalinized matrix. No mitotic figure was detected. Immunohistochemically, abovementioned cells were diffusely positive for inhibin and  focally positive for PLAP and hPL. For these nodules were well-demarcated, small in size, immunohistochemically positive for inhibin we diagnosed and reported them as PSN. Furthermore, both cases also showed SIL-type lesions with different degrees.

Conclusion: Cervical lesions can accompany placental nodules. The underlying cause of this coexistence needs to be revealed through further studies. 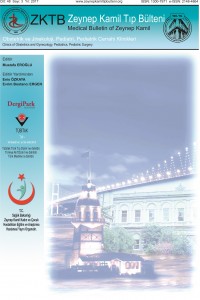