The Conscientious Intelligence Scale: The Study of Its Validity and Reliability

Throughout history, it has been an intensive work on judging the world, developing a valid and reliable scale that basically defines the conscience of man in essence and measures his conscientious Intelligence. In the development of the draft scale, the relevant literature was examined by a team of experts and an 84 item substance pool was created. Firstly, explanatory factor analysis was carried out through sample composed of 446 persons. 52 items with low substance loadings were extracted and the draft scale was formed with 32 items. Draft scale formed from 32 items A questionnaire of 5 types of likert type was applied to 1546 people with different demographic characteristics living in Kütahya. Conscientious intelligence with the findings of the 7-factor structure of the names; “1. Ethics Values”, “2. Moral Sensitivity”, “3. Responsibility to The Creator”, “4. Compassion”, “5. Conscious Awareness”, “6. Civic Sensibility” and “7. Wisdom” were eligible to be named. Confirmatory Factor Analysis after Explicit Factor Analysis The Cronbach’s Alpha coefficient of the scale tested by Structural Equation Modeling was 0,851. It was found that when the 0,5814 of the total variance of the scale was explained as the result of the analyzes made, the load values of the seven sub factors that were determined changed between 0,45 and 0,86. 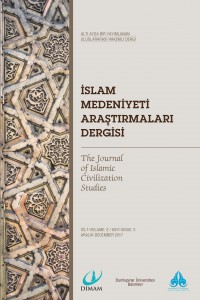