The aim of this study is to identify, map and assess the relationship of erosion susceptibility areas in Thrace Peninsula with current land cover. Thrace Peninsula is located in the northwest of the Marmara Region. In order to determine the amount of soil loss in the study, RUSLE (Revised Universal Soil Loss Equation) method in Rainfall Erosivity (R), Soil Erodibility (K), Slope Length Factor and Slope Steepness (LS), Cover Management (C), Support practice (P) factors are applied in geographic information systems. Landsat 8 OLI satellite image (dated July 2018) with 15 m panchromatic and 30 m multispectral spatial resolution was used to determine the land use. According to RUSLE method; Thrace Peninsula erosion susceptibility map was obtained and susceptibility classes were determined. These are divided into six classes: very low, low, moderate, strong, severe and very severe erosion. According to the map, %75.0 was very low, %6.7 was low, %8.2 was moderate, %3.4 was strong, %3.8 severe and %2.9 very severe erosion were found in the study area. The most susceptible areas in terms of the severity of erosion are the Istranca Mountains in the north, the Ganos Mountain in the south, the high slopes along the Koru Mountain to the southwest, and the slopes are slightly sloped. Ergene River, where plain are located, are also areas with moderate erosion and strong erosion susceptibility. In addition to the effects of precipitation and soil characteristics on the land cover, the areas opened for settlement because of human activities due to wrong land use and the areas used as meadows and pastures increased this susceptibility. Given that climate change and its effects are also effective on soil erosion, it is recommended that a regular and planned land use should be made for a sustainable natural environment in Thrace Peninsula. 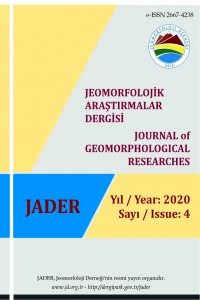