The purpose of this essay is to examine the relationship between belief in predestination and trust in God in terms of the disciplines of kalām and mysticism. Tawakkul is regarded in Islamic ethics as one of the positive characteristics of faith. Considering that humans cannot be all-powerful, they need to depend on and trusting another. As to religion, the being described is God. Notably, in Sūfism, tawakkul is a significant indicator of worshipping with reference to the human-God relationship. Moreover, the content of the concept is closely associated with the tenet of predestination in kalām. There is a fine line between being responsible and fulfilling the tasks given and the belief in destiny. In the Sūfī understanding of tawakkul, relinquishing the will described as the final state of the worshipping and the state of submission to and trust in God, which is a positive attitude, when combined with the kalām belief that everything happens by a divine decree, can turn into a problematic phenomenon. The impact of the problem in question on the underdevelopment of the Islamic societies in the last two centuries. However, it should be kept in mind that a sound interpretation of the traditional perception of the belief in destiny in both Sūfism and Sunnī kalām literature may lead to a tawakkul understanding encouraging and strengthening the human and the society. In the present study, the concept of tawakkul has been discussed with regard to the doctrines of will, power (qudrah), preordination-destiny (qāzā-qadar) within kalām discipline, and the positive relation of tawakkul with the belief in destiny has been investigated. 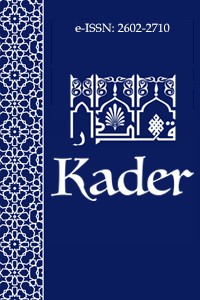